So I  went to a Chinese New Year celebration with my roommate a couple days before the holiday, and I am just now getting around to writing about it… That makes this post about two months late, but I suppose the extended wait has given me extra time to think about it. I was going to do a really cool post with videos of the different parts of the event, but apparently the file sizes are too big, so pictures will have to suffice.

I think the one thing that surprised me most about the celebration is how similar it was to an american Christmas Eve church service. The celebration was sponsored by and held at a Chinese church. There were several performances by different groups from the church – several dances, a couple skits, a few vocal performances, and even a string quartet – and a man came up and gave a sermon as well.  I don’t think that the average Chinese new year celebration is likely in this fashion, especially since Christianity is basically banned in China, but it really gave me a feel for the importance of this holiday for the Chinese. Christmas is probably the biggest holiday for America, and that’s how the Chinese New Year is for the Chinese as well.

The biggest difference I noticed between the Chinese service and the traditional American one is that the Chinese event was focused much more on the social aspect. Throughout all the performances and even the sermon, all the lights were on (which I suppose isn’t particularly surprising), and the whole audience was talking the entire time. Sometimes the talking got so loud that I couldn’t hear what was happening on stage, and I was on the second row. In American culture, it would have been extremely rude to be talking so loudly during the performances, but apparently socializing was expected and even encouraged at this event.

The service started out with the traditional dragon dance, except it wasn’t what I had originally expected. I had thought it would be several people in one long dragon costume like you see in the movies, but this was actually three people (one being a very cute little girl) wearing giant masks and doing a dance. Unfortunately, I did not think to start taking videos of everything until after this performance, but you can see the dragon heads sitting on the stage in the other pictures.

After that dance, a large group of adults came up and sang a couple songs as a choir. The first song was amazing grace, sang in Chinese, then the second song was a traditional Chinese song. it was very interesting to hear because even though I had no idea what they were saying, I could still get a general idea of what was being said because of the music and their tone of voice. 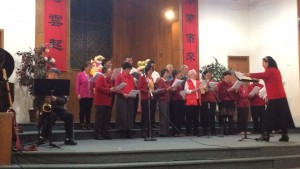 After that, there were several dances by people of different age groups. The first group was a very cute group of little girls doing a dance with paper lanterns. It was really cool to see them participating in a Chinese tradition at such a young age. It just goes to show how important tradition is to the Chinese culture. 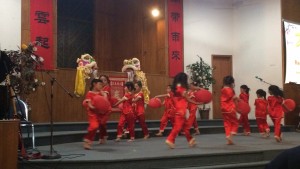 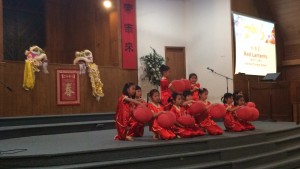 Then a group of adult ladies performed an umbrella dance. I really wish I knew the symbolism behind the dance. The song didn’t have any words, but it was obvious that the dance was symbolic of something. The dance started out with everyone in a line and everyone moving together in one motion. They all had jingles attached to their dresses, so the movements were accented by the jingles sounding in unison as well. 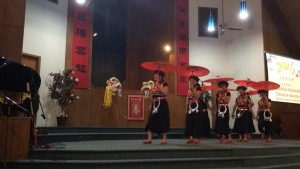 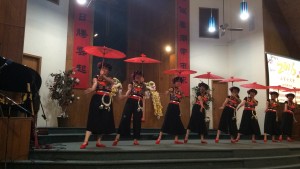 Next they formed two lines side by side and did something like a Chinese jig before breaking off again into a loser formation. 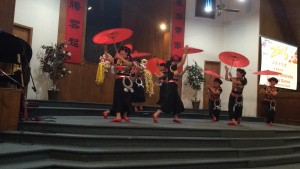 The next part was my favorite, and this is the part that I am sure has some sort of symbolism attached to it. Everyone joined together and formed a screen with their umbrellas, then one lady peaked out from behind the screen and began to do a sort of dance in front of it. Then she went behind the screen again, the umbrellas lowered down, and the same lady came out again. 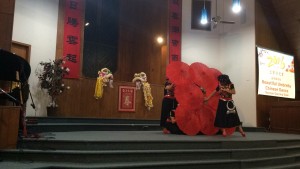 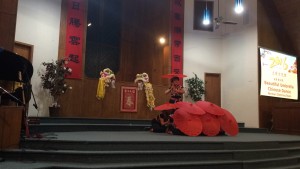 After that, the screen broke away, and the previous dance was repeated, but with the umbrellas hiding them more than before. Then it ended with the ladies reforming the block that had been the umbrella screen, but with all the ladies peaking out from behind the umbrellas. I have no idea what all of that could possibly symbolize, but it was kind of fun to just guess what it meant anyway. 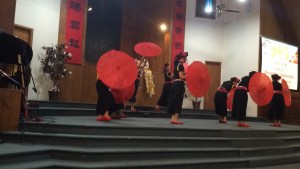 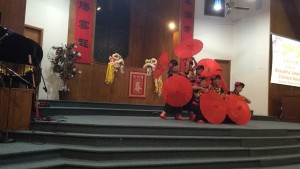 Next a group of girls performed a dance with little, colorful fans. It wasn’t near a intricate or involved as the adult group’s performance, but it was actually quite similar, and they still did a very good job. When I was younger, I used to want to learn how to dance, and that performance reminded me of what I had always wanted to do as a kid. 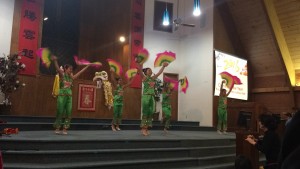 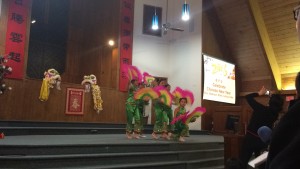 The last performance before the sermon was an adorable little girl singing a song with who I assume was her grandmother. Besides it being absolutely adorable, I also noticed that my brain was trying to translate what it heard into words that I actually recognized, which was an awkward combination of English and French. For instance, the first part of the song is “ruo wo shi yi duo” (pinion courtesy of my roommate), which means “if I was a,” but I definitely heard “grow up, shury dee,” which is a combination of English and gibberish. At any rate, is was very cute to watch, and I was actually able to upload a tiny portion of the song. So if you want to see about three seconds of adorable cuteness, you can click the link below. 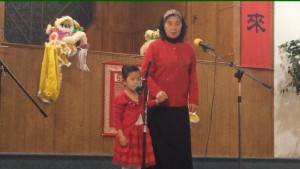 After the girl finished singing, a man came up to give the sermon. It was about “overcoming the beast,” with “the beast” being sin. I only know that because “overcome the beast” was the only thing he ever said in English, and I am pretty sure from the slides on the screen that the beast was supposed to be sin. Any way, at that time my roommate was not with me because she was getting ready for a skit that she was in, so I was entirely on my own trying to figure out what the speaker was saying, and that was not a very successful attempt. But despite me having no clue what he was saying, I noticed that I occasionally forgot that I didn’t know what he was saying, if that makes any sense. He talked for about ten minutes, and after the first couple of minutes my brain started absorbing the information even though I didn’t exactly know what that information was. I started picking up on words that he frequently repeated, and at the time I was actually able to start to get a general gist of what he was saying based on a combination of his body language and those repeated words. For instance, I could tell if he was talking about something good or bad depending on whether he was relaxed or firm.

After the sermon, they had all the children go to the front so they could receive their little red packets. Apparently in Chinese tradition, every child receives a red packet on Chinese New Year, and the packet always has a little bit of money in it. Of course, all the kids were extremely excited to be receiving the packets, but they each had to anxiously wait their turns. It was really cute to see all the little kids getting so excited over receiving a dollar in each of their little red packets. 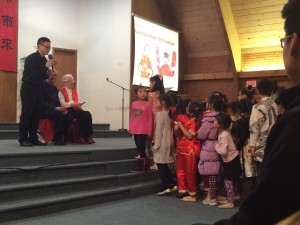 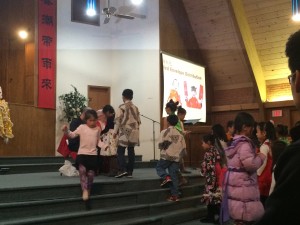 Towards the end of the celebration was the skit that my roommate participated in. My roommate explained the plot to me beforehand, so I actually knew what was going on during the performance. The basic plot of the skit is that a girl has mistakenly received some counterfeit money, and her mother has advised her to just go out and spend it to get it off her hands. The girl does not really like this advice, but she tries to go out and do it anyway. 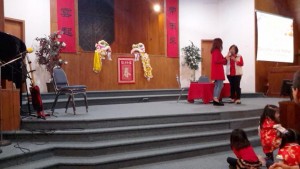 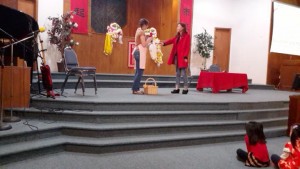 Then the same thing happens with a taxi driver, except this time the girl feels guilty before trying to use the money, so she just pays with real money in the first place. 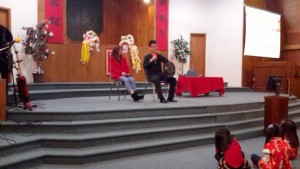 Then the whole thing ends with the main character explaining to her mom that she just couldn’t bear to spend the counterfeit money because it wasn’t the right thing to do, so they mutually decide to never do that again. In the pictures, my roommate is the only one on stage who isn’t Chinese. But even though she is not even fully fluent in regular Chinese yet, she completely mastered the new, very difficult dialect for the skit, and she even had several people compliment her on how accurate her pronunciation was. It just goes to show that anything is possible if you just put a little effort into it. 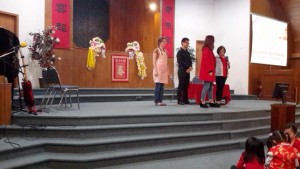 There were several other performances other than the ones I mentioned, but these were the ones that were the most interesting. All in all, the celebration lasted about three hours, but it didn’t hardly feel that long because all the performances were so engaging. The event was extremely relaxed, so it made it very easy to just set back and enjoy it. I really love going to all the various Chinese events with my roommate because I get to experience an entirely new culture that I really don’t know anything about, and every time I become more and more comfortable with the style of how things are done. Over all, the Chinese culture, or at least the Chinese-American culture, seems much more laid back than what I am used to, and that is a really nice change every once in a while.